Yuku is the Hiaki word for rain, however, just like in many other languages, there is a variety of words one can use to describe rain in different situations and contexts. Here are some examples of useful Hiaki words related to rainfall.

Tevuhria is the Hiaki word for what we know as the “monsoon season” here in the Southwest. It refers to the period of high humidity and frequent, heavy rain between late July and mid-September. During tevuhria, you’re much less likely to encounter a type of rain known as kepa yuku.

Kepa yuku is a light, pleasant, and gentle rain. This rain typically lasts longer in duration than other rains, but it’s closer to a drizzle and doesn’t usually occur with wind, so people don’t mind walking around in it and it doesn’t necessitate an umbrella. The cloud that causes kepa yuku is a low-hanging, seemingly motionless cloud known as kepa yuku naamu, and the phrase kepa cha’atula describes the state of the weather and the sky before kepa yuku actually occurs. 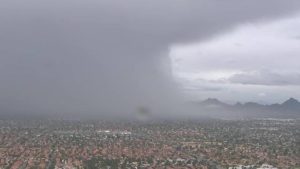