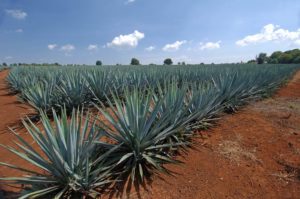 The Hiaki phrase wah kuu’u refers to cultivated agave. Wah kuu’u is a plant that is used extensively by many cultures throughout the Southwest for many different purposes, so there are lots of words related to the parts of wah kuu’u and its uses that are worth discussing. Here are some examples:

Kuu’u vi’am is the ridge down the middle of an agave heart, though the word vi’am usually only refers to the nape of the neck.

The word sana’im normally just means “ribs”, but when discussing agave, sana’im refers to the ribs that come off of kuu’u vi’am.

Ma’ikoam refers to the edible, outer parts of a roasted kuu’u vi’am. These parts are left over from the cutting and harvesting of wah kuu’u, and after roasting, you can just pull them off the heart and eat them. 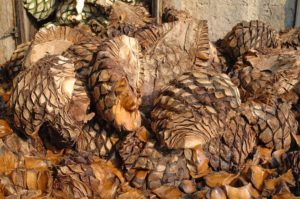 The many different uses of wah kuu’u include rope making. From the leaves of wah kuu’u, you can make a thick type of rope called wikia, which is used for things like lassoing animals. The middle parts of the plant can be used to make Ihkle which is a thin, string-like rope.

When harvesting wah kuu’u, the parts of the plant that are harvested are put into large cloth sacks. Eventually, when these sacks become full, they need to be sewed shut so that their contents don’t all fall out. This can be done with a hi’ikiam. Hi’ikiam literally translates to “needle”, but in the context of agave harvesting, it means a large, flat metal needle used for this specific purpose.