Echo is the Hiaki word for the cardon cactus, an enormous cactus that grows in the Baja California Peninsula and in Sonora. The Mayo, who live nearby the Hiaki in Sonora and who speak a closely related language, have a village called Echo hoa or Echo hoa’ara, which means “cardon home”. While this cactus and its parts could be used for all sorts of things, the Hiaki used to use the fruit of echo to make combs, called echo hichikiam. The fruits are all covered in stickers, but in order to grip one like a comb or hair brush you would remove some of them by trimming them off and partially burning them to make the surface more holdable. Echo fruits are also very fragile, so brushing your hair would require more than one to get the job done. If Hiaki women were travelling to another village with the intention of staying overnight for a ceremony or festival, they might consider bringing about ten each, as Hiaki women would usually have very long hair.

To talk about combing hair with echo, you could say

which means something like “everyone combed themselves with cardon combs”. 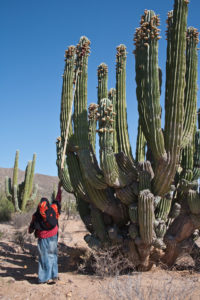