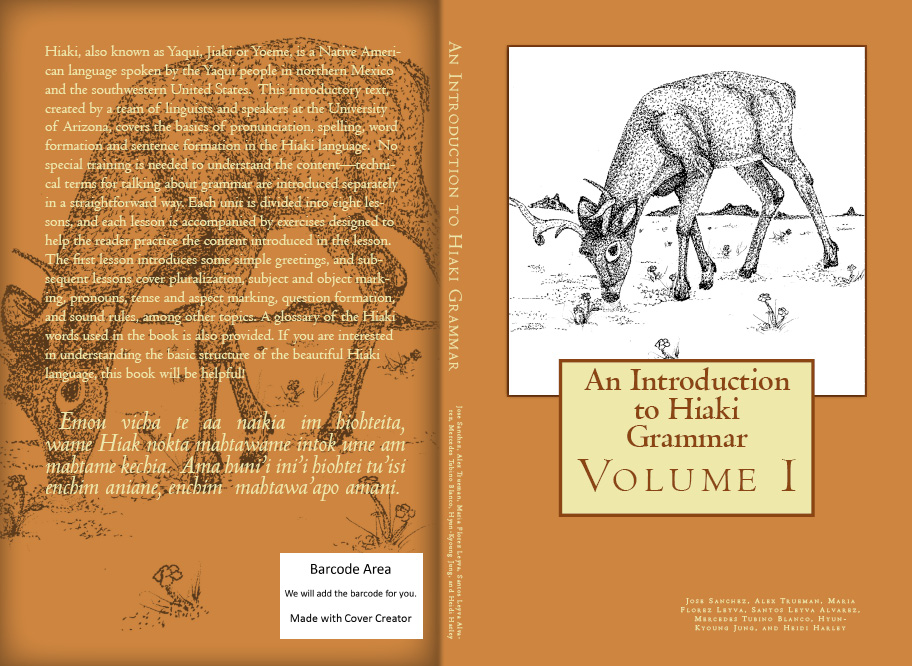 At the University of Arizona, a team of linguists and Hiaki elders is committed to creating a learning grammar for the Hiaki language, a language with only a few hundred native speakers in the United States. The team, headed by Dr. Heidi Harley and Maria Leyva, has worked for several years to develop a volume that is now available and currently used in language teaching. Contributors to the volume include Jose Sanchez, Alex Trueman, Maria Florez Leyva, Santos Leyva Alvarez, Mercedes Turbino Blanco, Hyun-Kyoung Jung, Louise St. Amour, and Heidi Harley.

Joe Sanchez, a graduate student in the Native American Masters program in Linguistics who graduated in May 2011,  worked with Harley’s team for many years as a research assistant to compile a large database of transcribed and glossed Hiaki sentences using “Fieldworks Language Explorer” software. He has also spent several years developing lessons that comprise the learning grammar volume.

A Hiaki learning grammar has not always existed. A learning grammar is one that a second language learner could understand. Previously, there only existed a teaching grammar manuscript imparted to Harley’s group by now-deceased linguistics professor Eloise Jelinek.

“[Jelinek] created a teacher’s manual. In it is advice on how to teach this lesson and that lesson. What we want to do is to decipher that to make a learning grammar. She gives this to teachers and this gives them a methodology on how to teach these subjects to students. But we are deciphering it; our work is also geared towards students,” says Joe Sanchez.

Sanchez explains these students are mainly English speakers who have no prior experience in the Hiaki language.

Jelinek’s manuscript, or workbook, was developed in part by training workshops that were developed by Hiaki elders as first language speakers, on how to articulate and teach the Hiaki language.

“It has a lot of linguistic terms that a Hiaki language student wouldn’t be able to understand,” Sanchez says.

In the lesson developing process Sanchez also reflects on his own Hiaki language learning experience:

For 6 years I was a Hiaki language learner on the reservation at Pascua. I came from the Bay area (San Jose) to learn the language, the language of my ancestry. I pull from those experiences as a second language-learner. I ask myself what was I thinking when I was learning these grammatical rules, not having any linguistic background. [By] basically soul searching through those teachings, that’s how I developed my lessons.

Sanchez had the privilege to work with Maria Leyva, a Hiaki elder and native Hiaki language speaker.

“Leyva has been my teacher for the entire 6 years,” Sanchez relates. He studied in a master-apprentice program developed by Mrs. Leyva.

The team uses Ofelia Zepeda’s O’odham grammar from A Tohono O’odham Grammar as a model. Sanchez explained that since O’odham is the closest language to Hiaki that has a learning grammar, he examined her work to understand how she structures each lesson. Sanchez expects the Hiaki learning grammar will function similarly to how A Tohono O’odham Grammar does: to teach middle school, high school, and college students.

Additional resources Sanchez utilized are the Sonora Yaqui Language Structures, a sophisticated book for linguists, and a dictionary which has a useful grammatical appendix.

Sanchez also utilized the database that he helped build.

“I type in the morpheme…and the database will take me down to all the examples that have been elicited in the past 6 years.” A couple hours of elicitation were transcribed weekly.

The process of developing a lesson plan takes about a week’s time and requires examining all the aforementioned people and printed texts. Each lesson (see below) is usually 3 to 4 pages. Thirty-two lessons comprise a volume.

Sanchez also hopes to teach a related immersion lesson in which no writing or reading is used, “just total physical response and gestures”. He has already developed a 25 minute introductory lesson that has been filmed, viewed at language revitalization conferences, and received much support and acclaim.